Early in February I came across some changes to the layout of the road.
There were notices up explaining that it was an experimental scheme, intended to stop lorries parking. 500 metres of the road had been made one way southbound and one lane plus the parking bays bollarded off.
The cycle route between Maidstone and the Medway Towns via Bluebell Hill used that 500 metre stretch northbound. I saw that as a problem.

Don’t worry I was told, the scheme isn’t complete yet.

Returning in March I discovered that the adjacent footway has been marked for shared use by equestrians, pedestrians and cyclists. Some blue signs have been added but the path remains cracked, potholed and broken and it is around one metre wide. It's also rapidly becoming overgrown.

KCC say they considered cyclists and equestrians at the earliest stages of the design and that a minimum level of provision was made as the scheme is temporary.

I don’t know why KCC haven’t done the job right but I do know the situation may become permanent unless cyclists campaign against it.

The consultation period ends on 15 July, please take some time to object to the scheme in its present form. 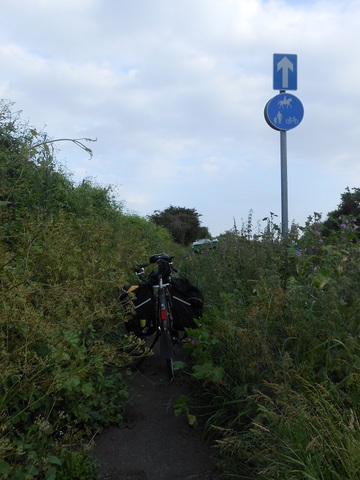