TfL say:
We are proposing a number of transformational changes to Vauxhall Cross as part of our Road Modernisation Plan.
The Road Modernisation Plan is the biggest investment in London’s roads for a generation, consisting of hundreds of projects to transform junctions, bridges, tunnels and pedestrian areas, making our roads safer and more reliable.
Working closely with the Lambeth Council, we are aiming to return the one-way road system at Vauxhall to two-way roads and significantly improve pedestrian and cyclist provision to help create a safer and less intimidating environment for vulnerable road users. The proposed changes would also help to improve connectivity throughout the area, and create a better environment for people living, working, and travelling through Vauxhall.
Following our initial consultation in 2014 on our high level proposals, we are now inviting your views on our detailed design proposals.

What are we proposing?
The changes we are proposing include:
Removing the existing one way road system around the transport interchange (Parry Street, Wandsworth Road, Kennington Lane, South Lambeth Road) by converting these roads around Vauxhall to two way
Providing more cycle and pedestrian crossings as well as segregated lanes and parking for cyclists
Improving existing and providing new public spaces
Redesigning the transport interchange, including a new central bus station

Why are we proposing this?
Reducing traffic dominance
The current gyratory creates an environment heavily dominated by motor vehicles. The wide carriageway encourages high speeds, especially outside peak periods
The gyratory can be difficult to navigate, and the one-way arrangement means that vehicles often follow indirect routes
Lack of facilities for pedestrians and cyclists
Large numbers of pedestrians pass through Vauxhall each day but the existing crossings do not always follow the most direct or popular routes, which can lead to pedestrians crossing roads away from the crossings
The Vauxhall gyratory has some of the highest numbers of collisions involving injury to pedestrians and cyclists in London
Cycle Superhighway 5 will improve conditions for cycling along Harleyford Road and Kennington Lane. However, there is limited cycle provision on the other roads surrounding Vauxhall Cross and a lack of connectivity between facilities
Supporting the transformation of Vauxhall
Vauxhall is the gateway to one of Europe’s largest regeneration zones, with 25,000 new jobs and 20,000 new homes coming to the Vauxhall, Nine Elms and Battersea area
Supporting Vauxhall’s distinct local character, the proposals look to the future – preparing for the increase in the numbers of people living, working, and visiting Vauxhall and its existing and new shops, businesses and attractions 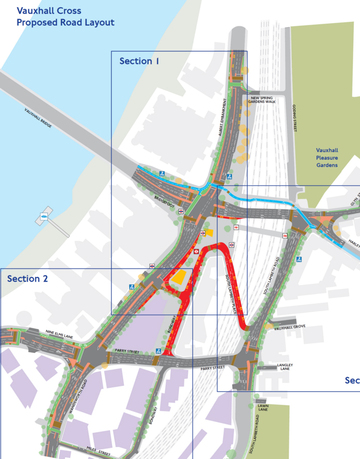