Overview
We are seeking your views on proposed changes to the junction of Borough High Street with Union Street and Newcomen Street. The proposals are part of the Central London Cycling Grid - a network of cycle routes in Zone 1.
This junction forms part of the Blackfriars to Tower Bridge Road route. The London Borough of Southwark consulted on other parts of this route in October 2015 – further details can be found here:
What are we proposing?
Our proposals aim to improve safety for cyclists and accommodate the predicted increase in cyclists along this route. The design would provide a more direct route for eastbound cyclists by removing a long detour and allowing them to proceed along Newcomen Street. By altering the signal phasing of the junction, we would also enable cyclists on Borough High Street to turn onto the new route.
Why are we proposing this?
The Blackfriars to Tower Bridge Road Route will provide a safer and more pleasant journey through a section of the city that is already popular among commuters as well as recreational cyclists. Transport for London and Southwark Council have identified certain junctions and sections of the proposed route that could be modified to improve cycle accessibility as well as safety for all users of the road, including pedestrians.
By closing a short section of Newcomen Street to motor vehicles and creating two-way access to the junction, we will remove a long detour from the cycle route. Changes to signal phasing at the junction, and modifications to existing street furniture, will create safer routes for cyclists without affecting pedestrian accessibility.
At construction stage the junction would also be resurfaced. Proposals for this junction are:
Union Street
Existing contra-flow cycle lane retained for cyclists travelling westbound on Union Street. This would connect to Southwark Council’s proposals for Union Street.
Existing advanced stop line extended to 5m with a cycle feeder lane. These extended facilities would provide cyclists with a larger waiting area in front of motor traffic, improving their visibility, and allowing them to safely move away at the traffic lights.
Borough High Street
Dedicated low-level cycle signals to inform cyclists of when to safely proceed across Borough High Street from Union Street and Newcomen Street.
Pedestrian islands widened to improve pedestrian accessibility across Borough High Street.
Cyclists permitted to turn left onto Union Street and Newcomen Street. This movement is currently banned and would remain banned for other vehicles. This allows cyclists on Borough High Street to join the route. The signal phasing would be altered to permit this movement. NOTE: All vehicles (including cyclists) would continue to be banned from turning right into Union Street or Newcomen Street.
All-round pedestrian signal phase retained so that pedestrians can safely make all movements across the junction at the same time.
Newcomen Street
Section of Newcomen Street closed to motorised traffic. Bollards would be installed approximately 30m west of the junction to enforce road closure to motorised traffic except for emergency access. NOTE: Newcomen Street is a borough-owned road and this aspect of the scheme would be progressed by the London Borough of Southwark.
Two-way cycling permitted on Newcomen Street allowing cyclists travelling eastbound to proceed directly from Union Street, and turn left from Borough High Street.
Existing footways widened to improve pedestrian accessibility.
We have carried out traffic modelling for this proposal. The results indicate that the proposed changes can be accommodated without undue delay to any road user. 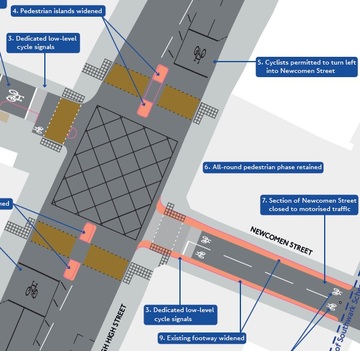