Notice is herby given that Southampton city council

proposes to make the following

The City of Southampton(various roads)

1. the effect of the order is to remove the contraflow cycle lane on

second avenue between first avenue and the north-westernmost

access to the NXP site, approximately 150metres south-east of allington

road thus reverting this part of second avenue to two way traffic. The

the north-westernmost access to the NXP site and allington road.

2.Copies of the order, relevant map and statement of reasons for

proposing may be inspected during normal working hours at my enquiry

office. Further information may also be obtained from the Southampton

3.Any person wishing to object to the order must write to at the

address given below or email:

Traffic.Orders.legal@southampton.gov.uk stating the grounds for 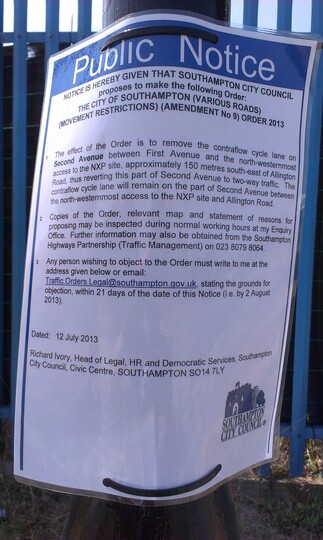